Here's the write-up from PBS:

This episode broaches the controversial and divisive topic of religion and art, from antiquity to the present day.

We travel the world’s temples, churches, mosques and ancient and symbolic sites through religions including Hinduism, Buddism, Christianity and Islam.
We look at the void that Christianity filled following the collapse of the Roman Empire and the growing scepticism about the older pagan gods, as we explore the role it played in changing the nature of religious art in the West and Near East. And we look at how modern artists embrace religious themes, searching to find a spiritual art relevant to the modern age. 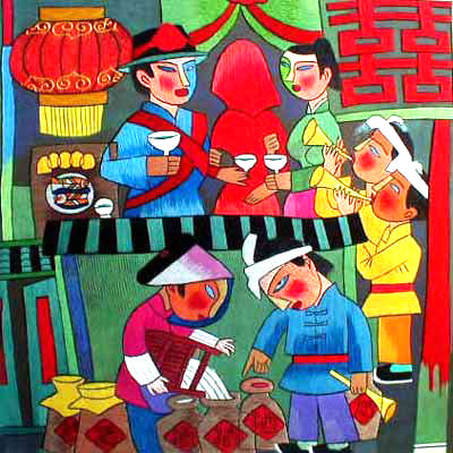 Here's how one observer analyzed He Qi's painting, Wedding at Cana.
​
“Wedding at Cana,” an oil painting by contemporary Chinese artist He Qi, interprets the story of Jesus’ first miracle – turning water into wine.  John 2:1-12 From a cultural studies perspective, both He Qi and this art reveal a great deal about religion and its function within cultures.
​
Knowing something of He Qi’s situatedness can be useful in looking at the painting. During the Cultural Revolution of 1966, He Qi, son of a non-Christian mathematics professor, was sent from Nanjing to do physical labor on a communal farm, an attempt by the Communist Party “to undo the un-Communist effects of city life and his parents' intellectualism.”  There he took up painting.  After winning an art competition, he says, “In the daytime I painted Chairman Mao; in the evening I painted Madonna,” copying Raphael’s “Madonna and Child” from a magazine cover.  He Qi became increasingly interested in art and faith, studying art history in China, Germany and Australia.  Recently residing in Minnesota, USA, he intends to return to Nanjing, China. From this situatedness, the artist has developed a distinct style for interpreting stories from the Bible, hoping to create a new image for the Chinese Christian church.
​
For religion, just as for many aspects of culture, however, change is inevitable but often not easy.  He Qi, despite his international acclaim, has had difficulty getting his work accepted by the Chinese Church. Chinese church leaders tend to link their Christianity with the European variety they first experienced through early Western missionaries.   For these leaders, Christian art is Italian Renaissance art.  They believe He Qi’s work is too Chinese.  Most are unwilling to display his paintings. In his hometown Nanjing, however, seminary students are especially appreciative of his work.  Through these new church leaders He Qi’s paintings may find a place in Chinese sanctuaries  Christianity Today

“Wedding at Cana,” typical of He Qi’s work, re-tells a Biblical story from a contemporary perspective using traditional Chinese characterization and imagery.  Viewers will, of course, react to the painting based on personal situatedness – Chinese, non-Chinese, Christian, non-Christian, for a few examples.  As a class, we can use the lens of cultural studies.
From this perspective we see the wedding scene as the intertwining of a religion with politics and economics within its culture.  Central to the painting is a Chinese wedding reception, an event of cultural importance following a religious ceremony.  In China, the traditional color for weddings is red.  Although the bride does not wear a red gown in this painting, red is a dominant color and at the top center is a figure in red, perhaps reminiscent of tradition. An important part of the reception is the traditional toasting of the bride and groom with a glass of wine.   Wine is the focus for the story.

The story in Christian scripture says that Mary tells her son Jesus that all the wine has been drunk.  Jesus tells the servants to fill the jars with water and then serve the liquid to the guests.  When the guests taste the liquid, they realize they are being served good wine.  Turning water into wine was “the first of his signs Jesus did at Cana in Galilees and manifested his glory.”  He Qi translates the scene quite differently.
Before looking at these differences, let’s see the importance of politics and economics intertwined with religion at this event.  That the bride and groom are of high rank and affluent is suggested by the lavish surroundings: opulent Chinese lantern, fine robes, ornate decoration and many jugs of wine.  The couple is looking at each other. Note that they appear at the top of the painting in a position of power.  Immediately below them are trumpeters providing entertainment for the event. They are looking up at the bridal pair, perhaps thinking of the remuneration they will receive for their service. At the bottom, powerless, is a servant looking down at the jugs of wine.  The various headdresses further denote relative positions.  At this reception, each has a rank, role, and economic standing.

The story as He Qi has painted it is quite different from the traditional Biblical rendition.  Notice that the painting depicts neither Mary nor Jesus.  It seems to ask:  Will Jesus appear to provide new wine?  Is the trumpeter in blue pointing at an urn in some way performing the transformation?  If so, what does this mean?   What is the source of new wine for people today? What are the differences in drinking water, old wine and new?   Qi’s interpretation challenges traditional beliefs, seeking new meaning not only for Chinese Christianity but for new times as well – religion in flux as it always is.
​
That “Wedding at Cana” makes a fine example for teaching and learning about religion, I can vouch for.  Some years ago an assistant priest who had a particular affinity for He Qi brought an exhibit of his work to the Episcopal Church where I was a member and Director for Education.  The parish, intrigued by He Qi and his paintings, was eager to know more about his work and discuss the questions he poses.  Had I known about the cultural studies approach to religion at that time, I suspect I could have made the worthwhile experience even more meaningful.